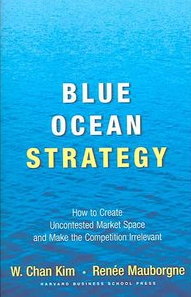 The book Blue Ocean Strategy proposes a non-typical path to victory over the competition. According to the authors, following a blue ocean strategy will make your competition irrelevant.

First, some definitions. The authors divide the business world into two oceans: red and blue. Red oceans are markets where competition is stiff and companies battle fiercely. The ocean is red with the blood of business gladiators who cut each other to shreds with competing offerings. Margins tend to be low because customers have many identical options to choose from. Customers view red ocean products as commodities.

Blue ocean products deliver more value, therefore customers are willing to pay more to have them.

Say the word “circus” to a person of a certain age and they will immediately think “Ringling Brothers.” The Ringling Brothers Barnum & Bailey Circus owned the American circus market for decades. Small regional players competed for crumbs. But by the 1980’s, circus audiences were shrinking and even Ringling Brothers had trouble keeping pace. Kids who once begged their parents for circus tickets wanted the latest computer games instead. The market, as a whole, was struggling for new customers and revenue was on the decline.

To make matters worse, expenses were increasing. Animals eat every day and food prices continue to rise. Animals require trainers, and trainers require salaries. Circus “stars” demand star treatment in an industry where the customers, accustomed to Hollywood celebrities, no longer find the stars of the circus impressive.

In short, the circus industry was a red ocean. Revenue was on the decline as costs continued to rise. Profits were squeezed.

But a Montreal street performer had a bold new idea. Create a new kind of circus. Eliminate animals and eliminate the cost of feeding them. Avoid “star” performers in favor of an ensemble cast including former Olympic athletes. Direct the marketing focus toward a completely new clientele: adults instead of kids. Recognize that adult customers will pay more money for a higher level of entertainment. Build elements of high-end entertainment (such as Broadway theatre) into the new “circus.”

The result: A brand new blue ocean in the form of Cirque du Soleil. The Montreal street performer, Guy Laliberte, achieved billionaire status through his new blue ocean. Another benefit: Customers willingly travel to places like Las Vegas to see Cirque du Soleil. So performers spend less time on the road than they would with a “traditional” circus. Performers enjoy a higher quality of life because they spend less time away from home and more time with their families. Some benefits, like this, are more important than any financial upside.

Wine drinkers know that the process appears intimidating and pretentious to the novice buyer. Personally, I know little of the industry jargon: I’ve picked up words like “vintage” and “legs” but beyond that, I’m clueless. And I’m not alone. An Australian wine company, Casella Wines, discovered that millions of prospective customers were as clueless as me.

Casella wines decided to challenge the entire industry with a brand new wine, [yellow tail]. Casella could have sold its product to the existing population of wine buyers (red ocean). However, strategists at the company tapped latent demand for wine among non-wine buyers, people who avoided wine because they didn’t want to learn all the mumbo jumbo. People like beer drinkers, a market three times the size of wine drinkers. So [yellow tail] was marketed without all of the typical focus on vintages, years, etcetera.

The result: [yellow tail] discovered a blue ocean of new customers. People who had rarely bought wine before began to buy [yellow tail]. Yes, [yellow tail] wooed customers away from their competitors, but it’s more important to note that they grew the entire wine market. The new brand continues to grow aggressively in an industry previously thought to be mature.

If you’re running an aggressive company, and the market has already been defined by your competitors, you are operating in a red ocean. Who says you need to compete there? Why play a game created and dominated by your competitors? Successful blue ocean companies never battle incumbents head-on. They re-write the rules.

The Next Blue Ocean: Where?

If blue oceans are so great, where do we find them? What industries offer the best blue ocean opportunities? Which companies are best at finding blue oceans in existing industries?

Value innovation is delivering a product or service in a manner that is both creative and relevant to the customer.

Value without innovation leads to minor incremental improvement. In the circus example, adding more animals might add value, but only in a same-old-stuff kind of way.

Innovation without value tends to be futuristic. Technology for technology’s sake. Although customers may find the innovation fascinating, they won’t pay for it without value. An example: Personal computers in the 1970’s. PCs were innovative, but they didn’t deliver value until the creation of useful business applications like electronic spreadsheets (Lotus 1-2-3, Microsoft Excel) and email.

Value innovation is a fruitful marriage between value and innovation. It’s delivering something creative that customers care about and will pay for. Value innovation is not necessarily cutting edge. Elements of Cirque du Soleil are seen in other forms of entertainment. [yellow tail] is not the first wine ever sold.

Rather, both of these examples combine value and innovation in creative ways. Each attracts new customers (adults, non-wine drinkers), eliminates things that add no value (animals, intimidation & pretentiousness), and add elements that customers are willing to pay for (drama, fun beverages).

A two-page newsletter cannot cover everything in Blue Ocean Strategy. The authors, W. Chan Kim and Renee Mauborgne, include many more example companies and frameworks for navigating your company to the next blue ocean.

Caution: Have a Plan

He who ventures beyond his current red ocean without a plan will wind up in a puddle. The authors caution against pursuing blue oceans based on gut instinct. Have a plan, and wear a life vest!

Note: A version of this post originally appeared on the WisdomGroup Blog.