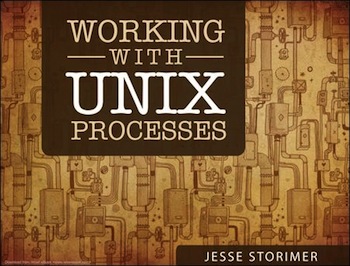 It is gratifying to know that learning something tangentially related to Ruby will, in fact, teach me more about Ruby.

Working With Unix Processes, by Jesse Storimer, is ostensibly about Unix internals. However, in reading this book, I have become more aware of how executables run on my favorite family of operating systems, which in turn gives me more insight into Ruby.

For example, what happens when we pass arguments to a process, Ruby or otherwise? How do the arguments get there? Storimer offers a 1-line Ruby program called argv.rb that we can use to play with the ARGV array:

Once we have our hands on the ARGV array, we can parse it and manipulate it at will.

The section on forks contains a lot of mind-bending fun. The author offers some code to explain how forks work, but some concepts are only understandable when we write our own code. I had to write my own in order to raise my comfort level with forks.

Here’s what the code does:

Running the above Ruby code produces the following results:

Digging further: Let’s look at the names that correspond to our pids.

We get zero data for the pids 79703 and 79704 because those processes terminated with the program forking_around.rb. However, 76751 shows bash because bash is still running.

The book is full of rich playground examples that go much deeper than this. Time slips away when I get rolling with this stuff!

The book is new so you can expect a few typos. If you run into problems with sample code, a quick Google search will lead you to the corrected text. For example, early in the book I had problems with a command that returns the maximum number of processes allowed on a system. Turns out there was a typo, and the correction was posted by the author himself on the publisher’s errata page.

I enjoyed reading Working With Unix Processes because it replaces a belief in “the magic of Unix” with a sound understanding of Unix fundamentals. The book is clear and brief with plenty of examples. The author assumes that readers have at least a basic understanding of Ruby. After that, you only need a command line, IRB, and the willingness to explore.