Automatic ctags with RubyMotion and Vim

RubyMotion includes a rake task that generates Exuberant Ctags. To generate tags, run the following in the root directory of a RubyMotion project.

How Ctags Save Time

Ctags can save you time. For example, when creating a new class called HomeViewController that inherits from UIViewController, typing the first view characters of the superclass will produce the drop-down shown below. 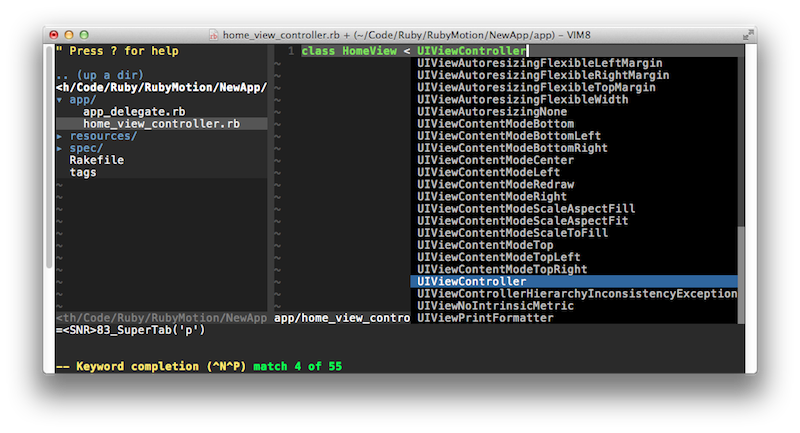 RubyMotion’s implementation of ctags includes support for built-in iOS classes like UIViewController. The code completion and drop-downs offered by ctags will reduce keystrokes and errors, freeing the developer to focus on solving harder problems.

Here’s the script. You can use any name that suits you. My script is called mmotion.command (with two m’s at the beginning to distinguish it from the standard motion command) and it’s in the ~/bin/ directory.

All of the work is done by by four lines. The remaining lines are comments or ‘echos’ that tell the user what’s happening while the script is running.

If ~/bin/ is in the $PATH, you can run the script with the following line command:

Of course, we can still do better by leveraging the power of aliases in ~/.bash_profile.

Adding an Alias to ~/.bash_profile

Dropping an alias into ~/.bash_profile streamlines the process even more. You can use any alias you want as long as it doesn’t confilct with another command. Here’s what my alias looks like:

Taking the Script for a Spin

Now we can build a new RubyMotion app called NewApp with these results:

After the bash script ends, it lands in the directory from which it was originally run, no matter what directories it changed to during execution. This script will open the new app in Vim when it’s done.

From here, you can $ cd NewApp and type rake to run the app in the iOS simulator.

If you notice any glitches with this approach, feel free to send me a “heads up” via the contact form on this site or in the blog comments below.

« PREV · The Vast and Endless Sea Apprenticeship Patterns · NEXT »