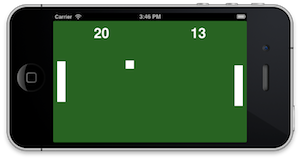 I recently completed the iOS Accelerated course at the Mobile Makers Academy. For one of our homework assignments, we were asked to build a version of Pong that runs on iOS. Our instructor, Don Bora, started us off with some skeleton code in Objective-C. Each student had to take Don’s code and:

How do you determine whether the pixels of the ball have collided with the pixels of a paddle? What about wall collisions? When a collision occurs, where should the ball bounce next? As with any application, there are many details to consider.

Of course, Don had already introduced the necessary skills in earlier lectures, labs, and homework. It was our job to put the pieces together.

Members of the class paired with each other. We shared solutions and advice. In time, we each ended up with a working version of Pong in Objective-C. It’s exciting to see a favorite childhood game running in the iOS simulator on your own machine, especially if you built the game yourself.

As expected, the two solutions look similar. Source code is on GitHub:

I encountered a few RubyMotion snags during development:

Update (3/13/2013): The issue with touch events has been resolved, thanks to advice from Turki Al-Qusaimi in the comments below. Updated code has been pushed to the master branch on GitHub.

Of course, I introduced a few bugs of my own while developing the Pong game. At one point, the velocity of the ball increased every time a player scored. It made the game exciting! But I didn’t know the cause of the acceleration, and good developers strive to maintain better control over their projects.

I eventually found the acceleration problem: When using an NSTimer object to control animation, you have to invalidate the timer at the beginning of each cycle, or the animation will accelerate. That’s a useful thing to know.

The rest of my work in RubyMotion went well, and I continue to enjoy the product. I plan to update the code once the touch event issues have been resolved.

Why should a serious developer spend time writing games? I can think of a few reasons:

Of course, the most important reason was given by a captain of the USS Enterprise NCC-1701:

The more advanced the mind, the greater the need for the simplicity of play.
~James T. Kirk

Building the Pong game was an interesting exercise in testing the capabilities of RubyMotion. Having done the work, I can look back and see some areas where I could improve the results. For example:

My team and I build business apps. My gaming experience is limited. If you are a game developer, and if you see anything in my code that could be done better, your ideas are welcome. Feel free to submit a pull request via GitHub, or you can drop a note in the comments below. Thanks!