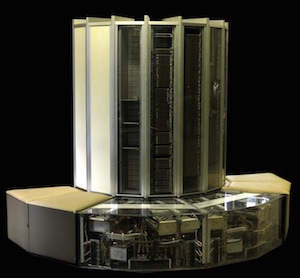 The Chicago chapter of the Association for Computing Machinery (Chicago ACM) hosted a lecture titled Supercomputing and You yesterday evening. The talk was delivered by Sharan Kalwani of Fermilab. Kalwani’s background blends mechanical engineering and computer science with decades of high performance computing experience.

This article will use the terms supercomputing and high performance computing interchangably because we are discussing the field in general. In an engineering document, the distinction would be more important.

By definition, supercomputers perform at least ten times faster than the current state-of-the art. The definition is a moving target. The processor in today’s smartphone would have been considered a high performance computer a decade ago.

Seymour Cray is regarded as the father of the supercomputer. Cray cobbled together the first supercomputer using off-the-shelf components of the day and his unique ideas about computer architecture.

For example, Cray observed that the speed of an electrical signal was one bottleneck in computer performance. Electrical signals travel at the speed of light. Light can travel roughly one foot in one nanosecond. Therefore, Cray decided that all internal cables in his new system would be less than a foot in length. No input would need to wait more than a nanosecond for a signal.

Why do we need to spend time and money on high performance computers? How does the general public benefit?

HPC enables us to solve problems that elude typical computers. For example:

The bottom line: High performance computers deliver a return on investment that far outweighs their cost.

Many of the advances that we enjoy on today’s laptops were invented by HPC architects. Kalwani shared one example: Cray invented the solid state disk (SSD) when mechanical disk drives proved to be a bottleneck. Can you imagine what an SSD must have cost in 1982 when it was invented? Today, SSDs are standard equipment on many laptops.

Who Has the Fastest Supercomputer?

Top500.org lists the fastest supercomputers on the planet, ordered by number of floating point operations per second (FLOPS). The race to be the fastest is highly competitive, so check the list for the latest champion.

There are those who believe that the Top 500 list is missing a few names. Some governments or companies might not want to publicize their HPC skills.

Supercomputers gulp electricity. Rule of thumb: One megawatt of electricity used over the course of one year costs $1 million. The fastest supercomputer in the world uses 17 megawatts of electricity, so its owners have an annual electric bill of $17 million dollars.

The Green 500 list recognizes the most energy efficient supercomputers in the world.

Kalwani closed the historical section of his talk with a discussion of The Fourth Paradigm of discovery. The concept comes from a collection of essays published by Microsoft Press. As of this writing, a free PDF of the book is available from Microsoft Research.

The book’s introduction posits that there have been four paradigms of human scientific discovery:

One example of the Fourth Paradigm in action: Recent discoveries of sub-atomic particles were initiated by eScience. Software running on high performance computers identified trends, and the scientists followed up with deeper investigation. Discoveries followed after that.

Businesses have led the way in extracting trends from mountains of data. This path offered limited results for scientists because computers were too slow to handle scientific data in a timely fashion. Partial differential equations eat many CPU cycles!

High performance computing opens up a new universe of data insight for scientists and engineers.

The Future of HPC

Kalwani ended the talk by looking into his crystal ball and telling us about the future of HPC. A few trends on the horizon:

Thank you Sharan Kalwani for presenting, and thank you Chicago ACM for hosting.

The photo at the top of the article shows a Cray-1, the first supercomputer, on display at the Swiss Federal Institute of Technology (EPFL) in Lausanne. Some of the original panels have been replaced with plexiglass.