Hi, I’m Warren. He’s Charlie. He can hear, I can see. We work well together.

~Warren Buffett,
at the start of the 2015
Berkshire Hathaway annual meeting 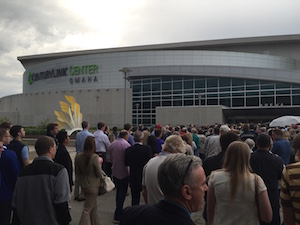 Over 40,000 shareholders attended Saturday’s annual meeting. What draws so many shareholders to Omaha every year? The opportunity to learn.

The Meeting, In a Nutshell

The formal shareholders meeting only lasts fifteen minutes, from 3:30pm to 3:45pm. For the rest of the day (excluding an hour for lunch) Buffett (age 84) and Munger (age 91) answer questions from journalists, financial analysts, and randomly selected members of the audience.

Each Berkshire meeting starts with a short movie. One year, the movie included information about a recent acquisition, a deal that had been completed just hours before the meeting. This year’s movie was a humorous montage of skits worthy of Saturday Night Live, woven with ads for Berkshire products. Berkshire brought in Hollywood director John Landis to direct this year’s opening movie. One skit included a boxing match between Buffett and Floyd Mayweather. Charlie Rose interviewed the pugilists before their bout. Mayweather and Rose played themselves in the skit.

Buffest and Munger answer questions from the stage while sipping Coke and munching See’s candy. Their answers tend to be short and direct, laced with wit. Snippets of wisdom from the Q & A session:

Throughout the Q & A period, Buffett praised several of the Berkshire managers by name. When a questioner said something good about American Express, Buffett praised Ken Chenault. When someone had positive words about Berkshire’s insurance holdings, Buffett credited Ajit Jain. Buffett and Munger share the credit for Berkshire’s performance. That’s a big reason why the companies perform so well.

When 40,000 investment-minded people gather, rich conversations will happen. After the meeting, I ended up having dinner with an asset manager from Brazil. Both of us arrived solo at Gorat’s, Buffett’s favorite steakhouse in Omaha. We decided to share a table when we realized that Gorat’s would seat a table for two faster than two tables for one. Capitalism, properly practiced, is about cooperation.

About 1,000 people gathered for the 5k Invest in Yourself run on Sunday morning. The weather was perfect.

Looking Forward to the Next One

The Berkshire Hathaway annual meeting offers an inspiring, powerful learning experience each year. I look forward to the next one.