Technology in a Flat World 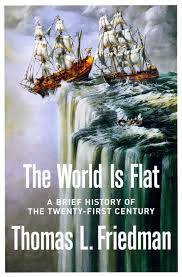 Change has always been with us. When change happens in the business world, companies can either adapt or die.

The World is Flat by Thomas L. Friedman was published in 2005 and rapidly became a bestseller. Friedman defines a flat world as one where intellectual work and intellectual capital can be created anywhere and delivered anywhere.

How does a business decision-maker lead a team to benefit from flatness? A few thought-provoking ideas are presented here.

Consider a local fast-food example: Today, if you visit a McDonald’s drive- through in Cape Girardeau, Missouri, the order taker isn’t even located in the restaurant. Drive-through customers are actually speaking with a rep in Colorado Springs, Colorado, over 900 miles away. The order conversation (along with a digital photo) is carried from Missouri to Colorado via high-speed data lines. Cooks in the kitchen fill the order, and the delivery clerk matches you to your order by looking at your digital photo.

One rep in Colorado can handle multiple restaurants around the country. Or even the world. The results: Faster service, more accurate orders, and lower costs.

In past decades, factory workers watched as their jobs were shipped to low wage-earners in other countries. White collar workers felt safe because it seemed that so-called brain-work would always remain local. No longer. Today your American income tax return may be processed by accountants in India. The electronics in your PC may be designed in Malaysia, with the plans emailed to a factory in China. Web sites are developed in Ghana and bill collectors ply their trade from call centers in Canada and Barbados. We live in a world where intellectual work can be created anywhere and delivered anywhere. As Friedman would say, the world is flat.

Some people may be alarmed by the idea tax returns processed overseas. However, the idea makes sense when you consider that tax returns are made up of numbers, numbers can be digitized, and anything digitized can be zipped over the Internet at the speed of light. An American accountant who hires low-cost workers elsewhere for rote tasks frees herself to focus on high-level tasks such as developing business relationships and creating sound investment strategies.

Friedman shares the following example from the US government. Former Secretary of State Colin Powell was asked when he realized that the world was flat. Powell’s one-word reply: “Google.” In his early days as a high-level official, Powell had to call an aide whenever he wanted to read a particular UN resolution. Then he’d wait hours while the aide dug up the document.

Today, anyone can type a UN resolution number into Google, and the text comes up immediately. Aides no longer do grunt work because the boss already has the information he needs.

In a flat world, grunt work is reduced when high-level execs get raw data through tools like Google. Today when the boss summons an aide, that aide had better be prepared to answer probing questions because the boss already has the raw data. Aides who provide insightful analysis are more valuable than grunts who fetch reports. Subordinates who are freed from grunt work can play a more valuable intellectual role in the business process. Everybody wins.

Friedman believes that flatness is driven largely by a concept called Triple Convergence, which consists of three components:

Advances in technology, such as PCs and the Internet, make it possible for small companies to look big. Brochure-type web sites were a very primitive example. Technology also enables big companies to look small & personal through contact management engines and customization software.

Companies using improved technology are doing so in creative new ways, employing techniques never imagined by the original inventors. One example: Home Depot’s big box stores are likely to have a wide selection of tools and supplies due to their sheer size. But the real competitive advantage comes when Home Depot combines size with effective supply chain management and automatic re-ordering of goods via the Internet, minutes after the customer plucks an item from a shelf. When a creative person receives a tool he really likes, he’ll want to do more with it and innovative uses are born.

Finally, just as the world was being flattened by better technology, over two billion new players stepped onto the field. People in Asia, Africa, the former Soviet Union, and Eastern Europe have adopted the latest technology in rapid fashion. These new players build on the improved technology, and are often the catalysts behind the creative new uses.

Great innovation often comes from outside the mainstream. Linux, the operating system that runs high-traffic web sites such as Google, was developed by a member of Finland’s Swedish-speaking minority: Linus Torvolds. Today, kids in rural India, Ghana, or China can use cheap PCs to learn Linux and eventually compete with the largest companies on the planet.

Cell phones are a great example. If you walk down a busy street in a developing nation, many of your fellow pedestrians will have a bottle of water in one hand and a cell phone in the other. City dwellers in Asia “wire” money to relatives in rural areas by cell phone. Nations with poor or non-existent land line service can shift to newer wireless technologies quickly because there is no old infrastructure to replace.

In the recent past, a talented engineer born & raised in India would need to travel to the US in order to practice his profession because fewer engineering opportunities existed for him at home.

Now, with global relationships, supported by high-speed internet connections, that same engineer can collaborate with peers in Silicon Valley and anywhere in the world, and still walk home for dinner when his day is done.

Who wins in this scenario? Everybody. The engineer wins because he now has another outlet for his gifts. And the world wins because we stand to benefit from the creativity of another engineer.

Flatness isn’t all about technology. Technology is merely a tool that enables change. And like any good tool, technology must serve the big picture. If your computers enable you to serve your customers well, then your company is in good shape. Computers that do not contribute to the achievement of goals are useless.

Note: An earlier version of this article was posted at WisdomGroup.com.

« PREV · Animated Graphics in Ruby Lessons from Berkshire Hathaway · NEXT »