To Achieve More, Measure the Gain 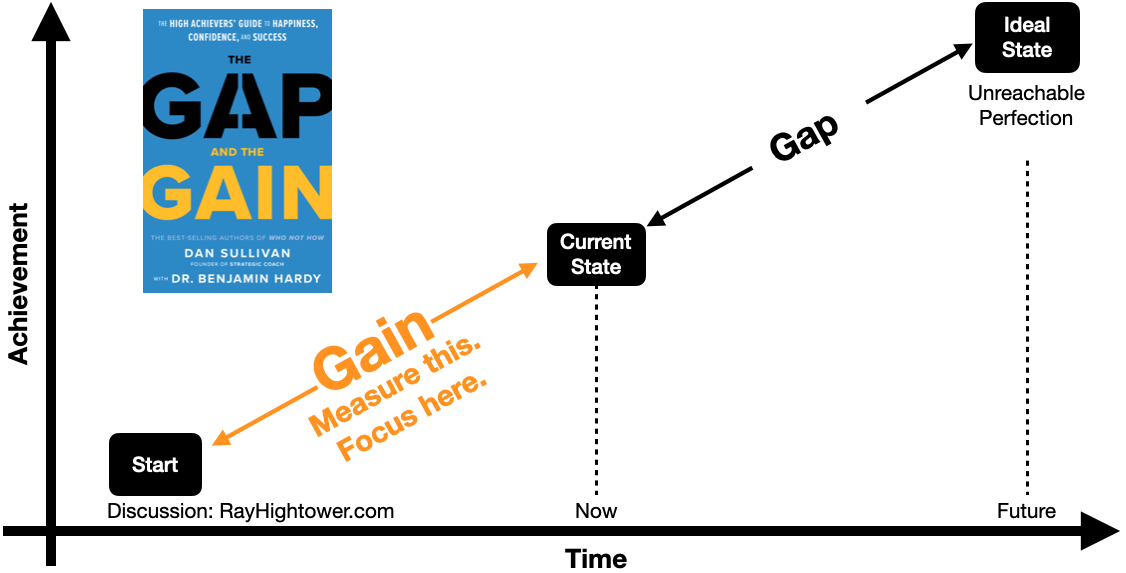 High-achieving humans are consistently striving for the next goal. And we tend to beat ourselves up over goals we’ve missed instead of celebrating the goals we’ve accomplished.

If you’re reading this post, you’re probably a high-achieving human. And you may have some experience with self-flagellation. Question for you: If beating yourself up was the path to success, wouldn’t you be perfect by now? The Gap and the Gain, authored by Dan Sullivan and Dr. Benjamin Hardy, offers a better way.

The Gap and the Gain

Sullivan and Hardy offer powerful arguments for focusing on our gains instead of our gaps. They have packaged their findings in The Gap and the Gain.

This post will summarize a few lessons from the book:

I encourage you to read the entire book.

As you can see from the graphic at the top of this article, the Gap is that space between our current state and the ideal state we’re striving to achieve. Of course, the ideal state is a moving target because humans are wired to strive for more. The gap grows larger every day, and it’s difficult to measure because it happens in the future. The growing gap is a source of ever-increasing frustration for high achievers.

While the Gap is all about the (possible) future, the Gain covers items we’ve achieved so far. The Gain is concrete and measurable because we have already done it. The Gain is an ever-growing list of achievements that we can be proud of.

When I first read The Gap and the Gain, and when I understood the concept of focusing on the Gain, I recalled a warning from my father many decades ago. Dad warned me against resting on my laurels.

The core concept of focusing on the GAIN was discovered through real-world experience with over 20,000 entrepreneurs. This is not theoretical. The authors gathered data by observing active, high-achieving entrepreneurs.

The British Rowing Team faced the 2000 Olympics knowing that they had not won a gold medal since 1912. At that point, team leadership developed a one-question filter for all training activities.

Will it make the boat go faster?

This single question served as a measuring stick for every training activity, every decision. Asking “Will the boat go faster?” kept the team focused when others might go off track. Examples:

Lesson from the rowers: Determine your criteria for success (like making the boat go faster) and get very good at saying “No” to anything that doesn’t contribute to success.

How might you compose a filtering question for your business decisions?

You’ve probably seen It’s a Wonderful Life, the 1946 film by Frank Capra. In the movie, an angel shows the protagonist, George Bailey, what the world would have been like if he had never been born. Seeing the world without his presence gives George an appreciation for the precious nature of life.

We can conduct our own George Baily exercise through mental subtraction, thinking of the absence of the good things in our lives. Imagining the absence of a positive event in our lives is more powerful than simply looking back on the event. In the words of the authors, “Mentally subtracting a material possession you’ve previously enjoyed increases your happiness with that item more than simply thinking back on when you purchased it.”

We feel a deeper appreciation for the Gain when we imagine what life would have been like without it.

If you must be in the Gap, give yourself five minutes and then move on.

In an example from the book, a college soccer coach was placed in charge of a team of rookie soccer players. Since the players were new, the coach decided to focus their attention on two skills.

The team of rookies lost several games in the beginning. And that’s when the coach introduced the five-minute rule. If they lost a game, the players were allowed to be down in dumps for five minutes, and then they had to move on.

The coach even used a 5-minute timer.

After the 5-minute alarm went off, the coach would set a 10-minute timer. For the next ten minutes, players were required to talk about the good things that happened during the game.

After the 10-minute alarm sounded, the coach set a 20-minute timer. During the 20-minute session, players were asked to point out the good things done by individual players during the game.

Once the players learned to stay focused on the items they could control (mindset and endurance), they began to win.

The Gap and the Gain is not a book that I can read once and put down. I find myself referring to it over time. I’m grateful for the friend who recommended it to me. Applying mental subtraction: Imagine what my life would have been like if I had never met that friend!

« PREV · Using Stories to Build Your Business Improving Our Assets · NEXT »