Diamonds for Ten Dollars Per Carat

Blogger’s Note from Feb2013: This article was originally posted on the WisdomGroup blog in Jan2007. In hindsight, my predicted timeline was too aggressive. However, the rest of the post remains sound. 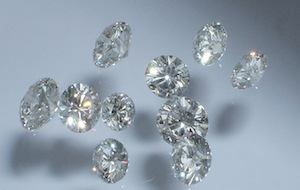 Woolworth’s and Fats Waller are long gone, but Waller’s tounge-in-cheek prediction will come to pass in the next few years. Diamonds will sell for $10.00 per carat in the year 2015. Advances in the fabrication of synthetic/cultured diamonds will drive down the price and value of these “precious” gems. At the same time, the needs of computer manufacturers and huge economies of scale will make it worthwhile for diamond fabricators to roll out cheap diamonds by the pound.

The diamonds I’m talking about are chemically identical to diamonds found in the mines of South Africa, Canada, and other spots around the world. I’m not talking about cubic zirconium. I mean man-made diamonds that are arguably superior to diamonds found in mines. Mined diamonds occur in nature, and they are formed when carbon is exposed to millions of years of heat and pressure beneath the earth’s surface. Volcanic activity can play a role. As natural diamonds form and harden, they tend to envelope impurities within. These impurities, (the diamond industry calls them “inclusions”) can greatly reduce the value of a diamond.

There are several ways to make a diamond. Some methods duplicate the heat and pressure deep within our planet. Others grow a diamond from a “seed” crystal in a special chamber. Regardless of technique, a man-made diamond will only contain inclusions if that is what the manufacturer wants. Cultured diamonds are real, and they’re more attractive.

Check out this article in Wired Magazine. The writer interviews two diamond makers right here in the United States. Apollo Diamond, Inc. sells diamonds for jewelry and technology. Gemesis sells colored diamonds that are rare in nature (very expensive), but so easy to make in their Florida-based warehouse. Other entrepreneurs are sure to follow, and prices will certainly fall. The biggest drop will come when diamond-makers in China, India, and other manufacturing powerhouses come online.

Are Cheap Diamonds Worth Making?

Computer industry insiders are familiar with Moore’s Law. The law says that computers will double in processing capacity and halve in price every eighteen months. Moore’s Law has held true for over forty years since Moore first announced his prediction in the early 1960’s. But now Moore’s law is approaching a wall.

Today’s microprocessors are made of silicon. Each new microprocessor generation contains double the number of transistors of the previous generation. Two byproducts of cramming lots of transistors on a piece of silicon: processing power (good) and heat (bad). Heat must be removed from the system in order for it to work properly, and that’s why computers have fans, heat sinks, and (in some cases) liquid cooling systems. Even better: Make chips that can take the heat!

Diamonds Can Stand the Heat

Diamonds withstand heat that would evaporate silicon. Researchers at the University of Arkansas have demonstrated that “Diamond, the best thermal conductor known, is the ultimate choice… in the next generation compact, high power and high speed computer.” Other Universities and research institutes have found similar results. Google the term “diamond substrate circuit” and you will find over 600,000 hits. The only problem: Right now, diamonds are too expensive.

Diamond prices will plummet in a wonderful downward spiral as the following factors converge:

What About the Diamond Cartel?

Some argue that the powerful diamond cartel, an entity that has held the line on diamond prices since 1905, will squelch the synthetic diamond movement. They’ve allegedly toppled governments in their quest for global diamond control.

But the diamond cartel has never come up against the fiercely competitive beings of the technology industry. Microsoft, Intel, Apple, Dell, HP, IBM, Google, Sun, SGI, AT&T, Oracle, and all the rest are fiercely aggressive, amazingly brilliant, and they love to win. These companies have honed their skills against each other in a global marketplace that devours companies that make mistakes. Do you really think the diamond cartel can stand up against technology industry titans?

Another factor: Governments are hungry for weapons, and weapons are driven by computer technology. A government bent on military might will not bow to the wishes of a cartel that sells shiny stones.

The bottom line: The diamond cartel will be broken.

Simple. I pulled those numbers out of thin air. Almost. I was at a family reunion two years ago when I first decided to make my diamond theory public. My cousins are very opinionated (unlike me), and I needed to get my point across in a direct, simple, and shocking way. The idea “ten dollars in ten years” came to mind, hence Ten Dollars per Carat in 2015 (the year was 2005).

It’s hard to get the numbers exactly right when predicting the future. But the trend is clear. Synthetic diamonds (or “cultured” diamonds, take your pick) will plummet in price over the next few years. People will realize that they are:

Further, technology companies will demand diamond-based circuitry in their quest for faster and smaller computers. The future is clear. Diamonds will sell for ten dollars per carat in the year 2015.

GMail vs Microsoft Exchange · NEXT »