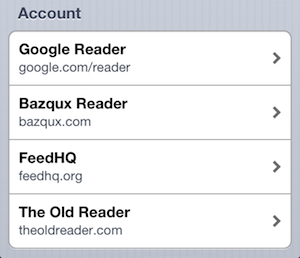 Yes, the name appears misspelled. But FeeddlerPro is my choice for RSS on iPhone and iPad. Feeddler has long been my favorite RSS reader. The developer’s decision to add support for services beyond Google Reader (Bazqux Reader, FeedHQ, and The OldReader) sealed the decision for me.

Feed Wrangler was a close second. I like Feed Wrangler’s minimalist approach to RSS. However, the app is missing a few features that FeeddlerPro already has baked in.

Of course, an RSS client is nothing without the server-side to keep everything synchronized. I chose The Old Reader because it syncs between iPhone, iPad, and web without extra fluff.

Google Reader is history, but RSS marches on.

« PREV · PechaKucha: Developer Education at TableXI Successful Companies Are Built Around Communities · NEXT »