Be Courageous About Your Ideas 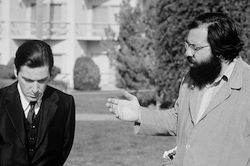 Things that get you fired when you’re young are the same things you win awards for when you’re old. You have to be courageous about your ideas. When you come up with something good, that means it’s different from what they expect so they’re likely to fire you. Years later (if you survive) they’ll bring it out as one of the great things that you did.
~Francis Ford Coppola, Director
The Godfather

Francis Ford Coppola was reflecting on his experience as director of The Godfather when he spoke these words. When Coppola was selected to direct the picture, he was young and untested. He wanted to use the young, unknown Al Pacino for one of the major roles, Michael Corleone. The suits at Paramount wanted Coppola to fire Pacino. Coppola defied the suits and stuck with his first choice.

And today, film historians regard Coppola’s decision as a genius move.

Where do we need to express courage right now?