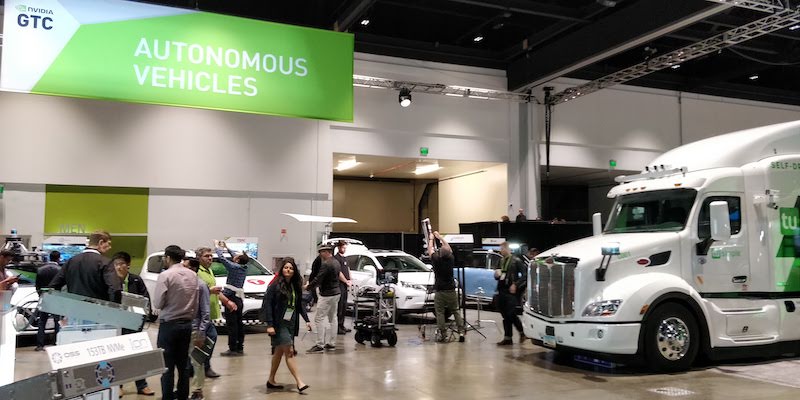 What do people do when they have a terabyte of data coming in every day? They ignore it, because they know there’s another terabyte coming in tomorrow. Pretty soon, they’ll be infinitely behind!
~Jensen Huang, CEO of Nvidia

The best humor contains a kernel of truth. Jensen Huang shared the above observation during his keynote at Nvidia’s GPU Technology Conference last week in San Jose, CA. The 9,000-person audience laughed knowingly!

Every industry has been hit by a tsunami of data, a tsunami offering advantages and challenges. Advantage: The volume of data means we can quantify our work and our decisions like never before. The challenge: Turning data into actionable information takes work. GTC 2019 was a gathering for people exploring ways to meet the challenge. This article offers a summary of the event.

Skip this section the history is already familiar to you.

The idea of a graphical processing unit has been around since at least the 1970s. For quality graphics, we need matrix mathematics performed at a high rate of speed. It made sense to delegate that work to specialized hardware so that the CPU can focus on general tasks. GPUs grew in popularity during the 1990s as personal computer prices dropped low enough to make them attractive to gamers. Gamers always want more power, so PC companies competed to meet the demand.

Any problem that can be expressed with matrix math is a candidate for GPU acceleration. Hardware companies began to pursue new markets for their rapidly improving GPUs, including:

Jensen’s keynote included an ROI chart for one of Nvidia’s customers, Pixar.

Highlights from this ROI example:

Faster turnaround at a lower cost. Enough to make any CFO smile.

GTC is expensive. Therefore it was important for me to have a clear purpose before setting foot in the door. Further, GTC offers depth across a wide spectrum of material… overwhelming for anyone who tries to digest everything at once. Given these constraints, I only registered & paid for those portions of the conference that met my needs. My pre-conference objectives:

Day one of my GTC experience was spent in a full-day deep learning, computer vision class. The class was led by Alex Qi, an Enterprise Solutions Architect with Nvidia’s deep learning team. The instructor led us through five exercises, each building on the previous one. Special thanks to Mariofanna Milanova, professor of AI and computer vision at the University of Arkansas, who helped with a particularly thorny exercise. Key take-aways:

One challenge: Each student was only allowed to spin up one exercise (including one Jupyter Notebook and one cloud instance) at a time. This makes sense for financial reasons. Why spend money for multiple instances when the student is only working on one exercise at a time? However, some students (like me) learn best in a non-linear fashion. We bounce back and forth between the examples absorbing information from multiple sources until it clicks.

But the linear, lock-step, one instance at a time approach forces the student to do the following if they learn by bouncing around…

That delay is a killer. Train-of-thought gets lost and learning is diminished. Linear learning is too slow, especially in a world of parallelism.

Fortunately, the DLI instructors were excellent. Even with the cloud instance issues, the professionalism of the instructors turned the class into a good use of time and money.

The Jetson Nano (shown at left in the photo) is a single-board computer that’s a little bit larger than a Raspberry Pi (at right). The Nano has four ARM cores, 128 Nvidia GPU cores, it runs Ubuntu Linux, and it sells for $99.

During the Nano announcement, I immediately jumped on Amazon, Element14, Ada Fruit, everywhere looking for a way to buy that board! No such luck at the time; too soon! Fortunately, Nvidia had the boards for sale right outside the auditorium after the keynote. Plenty of Jetson Nano inventory for everyone to go away happy.

Wouldn’t it be cool for Nvidia to offer future Deep Learning Institute courses on the Jetson Nano instead of being dependent on a cloud provider’s reliability?

Jetson Nano is especially attractive because it runs the entire CUDA-X suite of GPU applications. I am currently putting my board to the test, and you’ll see a post on this blog very soon.

Interesting note re laptop operating systems: Most attendees and exhibitors were running Microsoft Windows. Ubuntu Linux was the second most-dominant operating system, followed by macOS. Maybe my judgment is skewed because I have attended mostly web and mobile development conferences in recent years, where 95% of the attendees use macOS. Looks like powerful things are happening in Redmond, Washington. Especially in the GPU space.

Also on display: Jetson Nano, configured as a JetBot. Check out the video:

In the video, the Jetson Nano “sees” the edge of the table surface and other obstacles, and it avoids them. The JetBot learned how to identify edges and obstacles through a deep learning algorithm running on the Nano. Nvidia made all of the software for this demo open source. Check out the GitHub repo for details: https://github.com/NVIDIA-AI-IOT/jetbot.

Nvidia realizes that they’re selling picks & shovels to gold miners, and they’ve taken steps to invest in those ventures they consider promising. Nvidia Inception is an incubator, and Nvidia GPU Ventures invests money with select ventures.

The most valuable part of any conference for me: Meeting people. Listening to people. Learning from people.

GTC took the networking a step further by offering a special program: Dinner With Strangers. Go to a booth and sign up for dinner with a bunch of people you’ve never met before. In addition to software developers and engineers, I met entrepreneurs, investment bankers, VCs, private investors, and a few people who were just wondering whether opportunities in the GPU market are for real. Next time I make it back to GTC, I will sign up for Dinner With Strangers on day one.

Academic posters filled the hallways between the exhibit hall and the lecture rooms. There wasn’t enough time to review all of the posters. But the ones I saw covered an amazing level of detail in a tiny space. GTC awarded $5,000 to the creator of the best academic poster, determined via voting by the conference attendees.

If you are interested in GPUs, parallelism, or any field that can benefit from the two, then I would encourage you to explore Nvidia’s GPU Technology Conference. Look at the agenda in advance and decide whether you want to attend the sessions, DLI workshops, or just the exhibits. The exhibits alone are worth the trip, especially when you consider the people you meet in the process. And be sure to sign up for Dinner With Strangers. Congrats, Nvidia, on a well-executed event.