The Man Who Sold Hot Dogs 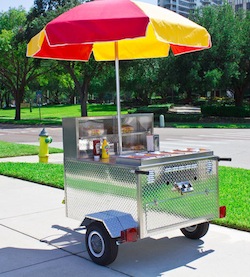 Note: This timeless story pre-dates the web, and it has appeared at WisdomGroup.com. Author unknown.

There was a man who lived by the side of the road and sold hot dogs. He was hard of hearing, so he had no radio. He had trouble with his eyes, so he read no newspaper. But he sold good hot dogs. He put signs up on the highway telling how good they were. He stood on the side of the road and cried “Buy a hot dog, mister?” And people bought. He increased his meat and bun orders. He bought a bigger stove to take care of his trade.

One day, his son came home from college to help him out.

Whereupon the father thought, “Well, my son has been to college. He reads the papers and listens to the radio. He ought to know.”

So the father cut down on his meat and bun orders, took down his advertising signs, and no longer bothered to stand out on the highway to sell his hot dogs.

“You’re right, son,” the father said. “We are certainly in the middle of a great recession.”

Whether times are good or bad, all of us must ask ourselves: What role is played by self-fulfilling prophesy?

Luck is what happens when preparation meets opportunity.