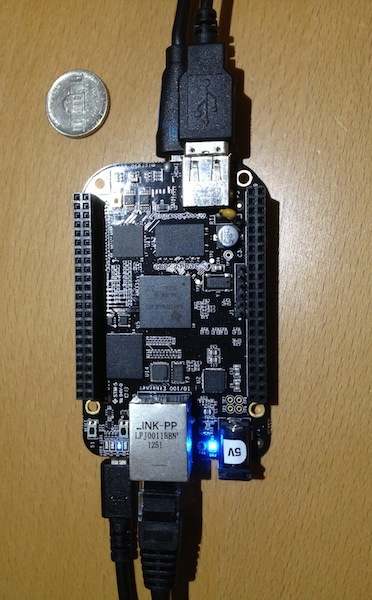 BeagleBone Black, like the Raspberry Pi, is a small, inexpensive computer that runs Linux. It’s smaller than a deck of cards and you can buy one for about forty-five dollars ($45.00). The device is made by CircuitCo in Richardson, TX, USA.

After a few minutes of boot time, we have a fully-functioning Linux computer with a GUI, Firefox browser, and other tools.

The BeagleBone Black has 2GB of flash storage on the board, and part of that is used for Linux. Here’s a screenshot after just a few minutes of ownership. 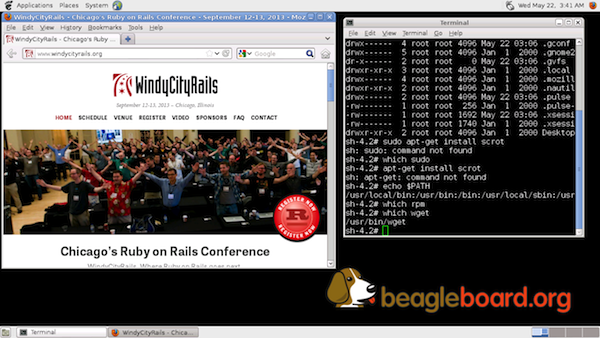 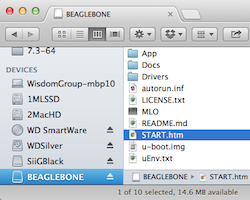 All of the paper documentation for the BeagleBone Black fits on a slip of paper roughly the size of two business cards. The meat of the documentation resides on the device itself. To reach the electronic documentation:

The documentation recommends against MSIE. 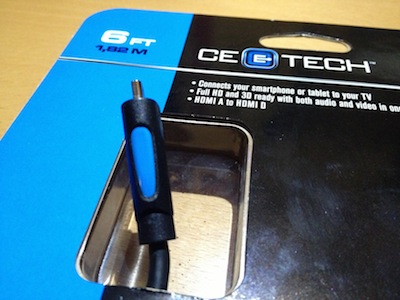 The manufacturer included a mini-USB cable with the device, so you can power it up right after you rip open the package. Gotcha: You need a micro-HDMI cable (or adapter) if you want to attach a monitor. I would have preferred a micro-HDMI-to-HDMI adapater in the box instead of the mini-USB cable. That’s a little nit-picky on my part since micro-HDMI cables are easy to find at Home Depot.

A quick shout-out to Home Depot: Their store-brand cables let you test the cable end without opening the package, right in the store. Excellent package design by Home Depot.

My second “gotcha” is more important: The curl command did not behave as flawlessly as it did with the Raspberry Pi, so I was not able to install Ruby as quickly as planned. Details below.

RVM, Ruby, and Rails installed easily with Raspberry Pi, even though the compilation time was long. With the BeagleBone Black, I received the following in response to the curl command:

Maybe it’s time to try RBEnv? I’ll post a solution when I find it. Or… if a reader of this blog already has a solution for the BeagleBone Black Rails installation challenge, please post in the comments below and I’ll credit you here.

Which is better, BeagleBone Black or Raspberry Pi? There’s no clear winner in my opinion. It’s a matter of trade-offs:

I’ve owned my ‘Bone for just over 24 hours. Lots more to learn. Looking forward to it!

« PREV · Upgrading Ruby With RVM Kali Linux for Pentesting · NEXT »