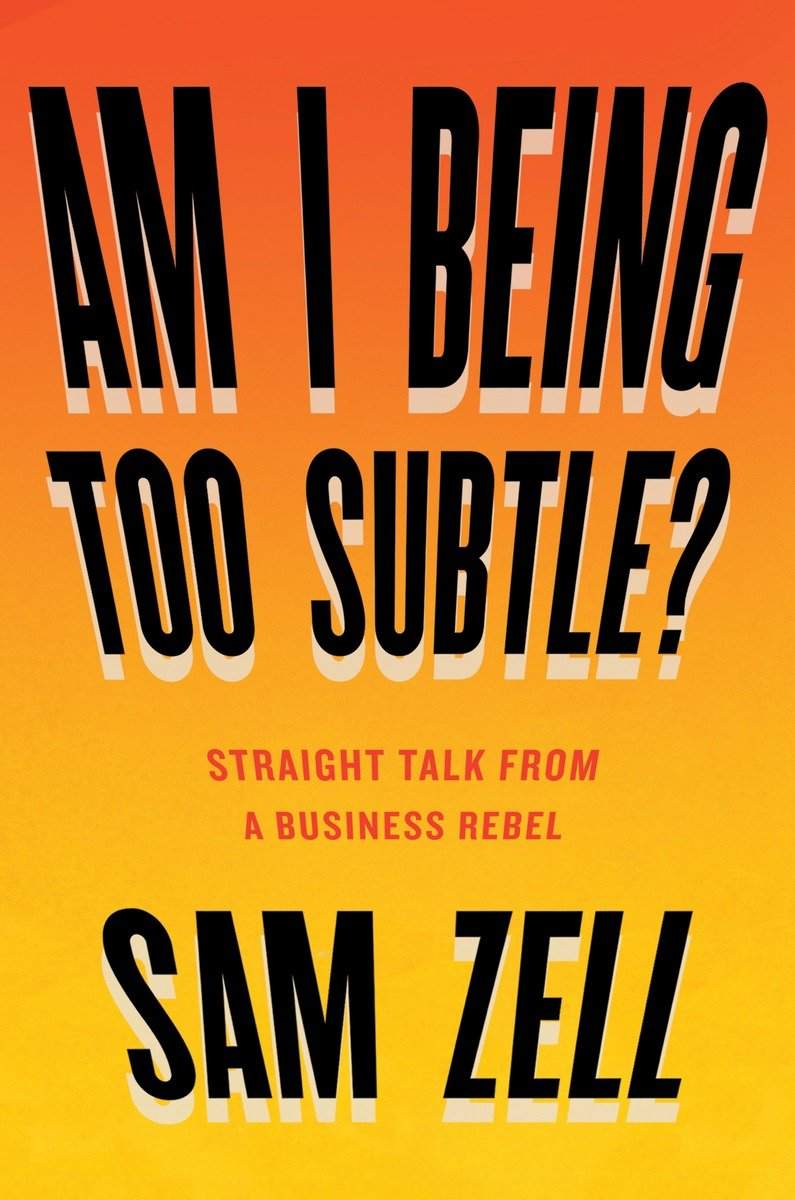 Business is not a battle to be waged. It’s a puzzle to be solved.

Sam Zell is a Chicago-based investor in real estate and troubled assets. He is known for successful business turnarounds and his direct style of communicating. Sometimes he ends his verbal messages with a question: “Am I being too subtle?”

Hence the title for his autobiography. Sam has an embedded sense of urgency.

Readers learn about the period prior to Sam’s birth when his parents were forced to leave Poland at the beginning of World War II. His parents, Bernard and Rochelle, were multi-lingual and intellectually curious. While many of their relatives and neighbors were content to consume local news from the Polish authorities, Sam’s parents read newspapers from Germany, France, Switzerland, and other nations where signs of war were brewing. Their curiosity about the world around them meant that they were well informed before the fall of Poland.

Zell’s parents and his older sister, Julie, left Poland just hours before Germany bombed the railroad tracks and marched in.

During the journey to America, Rochelle learned that she was pregnant with Sam. The year was 1941. Traveling from Europe to America meant several stops along the way, always avoiding the shadow of the Nazis. The family passed through Russia, Japan, and Curaçao before arriving in Seattle, WA, USA. Bernard had been a grain merchant in Poland. He saw the centrally-located city of Chicago as a natural place to continue his profession. The family relocated to Chicago, and Sam was born there on Sept 28, 1941.

Bernard’s and Rochelle’s insatiable curiosity was passed on to their son, Sam. After the family moved to the northern suburbs, Sam continued to take the train into the city, officially for school, but mainly to explore. As a pre-teen, he discovered that certain magazines were in demand among his north suburban friends. He purchased the mags for fifty cents each in the city, and sold them for three bucks in Highland Park. At age twelve, Sam had discovered arbitrage.

Sam’s formative years were spent at Camp Ramah, a Hebrew-speaking summer camp in Wisconsin. Young campers were treated as responsible citizens from day one. Same enjoyed the independence and the meritocracy for eight weeks every summer. The experience built his self-confidence.

Sam readily acknowledges the role that his parents played in shaping his life. They blessed him with an inheritance of intelligence, curiosity, drive, resilience, and self-determination.

Sam studied political science at the University of Michigan in Ann Arbor. He chafed at rote memorization. His love of motorcycles began in college. Today, he and his friends (they call themselves Zell’s Angels) take two motorcycle trips per year along windy roads with beautiful landscapes.

Zell launched his real estate career during his junior year at U of M. A friend’s landlord was building a 15-unit apartment building. Sam convinced his friend that they could manage the property for the landlord. They made the pitch and they got the management business. It never occured to Sam that he and his friend couldn’t do it. “Why not?” is part of his DNA.

After their first deal with the 15-unit owner, Sam and his friend created a brochure and they went around Ann Arbor pitching other landlords. He met his business partner, Bob Lurie, during this time. Bob’s detail-orientation was a welcome complement to Sam’s big-picture optimism.

Sam held summer sales jobs with Helene Curtis, calling on drugstores and supermarkets. Working in sales built up his tolerance for rejection. Today, he will tell entrepreneurs that indifference to rejection is a fundamental part of being successful.

Sam’s initial feelings about law school can be summed up in one quote from the book: “Law school was boring beyond belief.” He enrolled and graduated to please his parents. Decades later, as he found himself working through complex business deals, he was greatful for the thinking framework that his legal education had given him.

Zell bought his first building, a three-unit apartment building, during his second year of law school. His father was an early investor. This gave Sam a great sense of pride. The father’s investment was tangible proof that he recognized Sam as a legitimate businessman.

Investing Against the Herd

“Knowing the numbers” means having the discipline to listen to them—even if they’re not telling you what you want to hear.

Like the authors of Blue Ocean Strategy, Zell prefers to invest where there is little competition. Bidding wars are expensive. Succeeding in areas where others are fearful means that the investor must know their stuff. Attention to detail, mastery of numbers… these are areas that Sam and his team have mastered over the years.

Success in real estate, combined with a shortage of profitable real estate investment opportunities, led Zell to explore other businesses. He looked for troubled companies where he might help. Some saw his approach as exploitation. Sam sees value in buying and creating value from others’ mistakes.

Is that exploitation? No. When a turnaround artist acquires a troubled company, they’re taking a neglected asset and giving it new life. Zell wrote an article about his approach to resurrecting dead properties in 1976. The article’s title, The Grave Dancer, is the source of his often-cited nickname. Sam loves the nickname; colleagues present him with Grave Dancer-themed gifts.

With the launch of Bridgetown Partners, I find myself devouring books on all aspects of commercial real estate. Articles, too. Topics include syndication, taxation, cash flow analysis, raising private money, and… biography. Well-written biographies are fascinating because we get to learn about the circumstances that shaped the subject’s life, and how the subject responds to adversity.